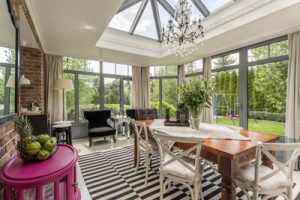 If you’ve been researching ways to update and add curb appeal to your home, you’ve no doubt come across the idea of having a sunroom installed. But, what exactly is a sunroom? A sunroom (sometimes referred to as a “patio room,” “patio enclosure,” or “Florida room”) is a type of addition that features large windows, allowing for an abundance of natural light and beautiful backyard views.

When homeowners are in need of additional living space, they have to decide whether to add to their existing home or move to a larger one. For those who don’t want to move, the choice comes down to installing either a sunroom or a traditional stick-built home addition, and sunrooms are often the superior choice. Cost is usually a primary concern, and sunrooms are generally much less expensive than traditional home additions. They also take significantly less time to build.

Some homeowners are hesitant to invest in a sunroom because they fear that they won’t be able to use it as much as they would a traditional home addition. But, that’s actually not the case. All-season sunrooms feature added insulation that allows them to be used all year long, even during the cold winter months (there are also three-season sunrooms available that can be used from spring through fall, if desired).

When it comes to sunroom installations in New Berlin, Wisconsin, and surrounding areas, there’s no one better than Bear Sunrooms. We’ve been serving this community since 1947, and we continue to install more sunrooms than anyone else in Southeast Wisconsin. We’re proud to be the only company in the region installing fully customizable sunrooms. Contact us today for more information or to schedule a complimentary in-home consultation.